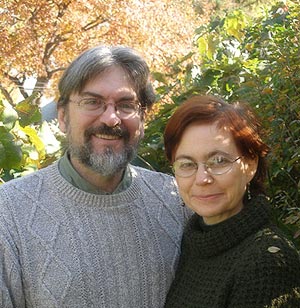 Gary trained at both the Minneapolis College of Art and Design and the Atelier Lack School of Fine Art, both in Minneapolis, MN. He also worked extensively in the graphic design field designing book covers and corporate logos before the “age of the computer.” He started performing at the Minnesota Renaissance Festival in 1976, where he eventually met his wife Susan.

Suzy attended the University of Minnesota at Duluth and the College of St. Scholastica. Suzy has worked almost all of her life in costume and theater production. In 1982 she started working at the Minnesota Renaissance Festival, where she met Gary. In 1990 she became ordained with the Universal Life Church and started performing weddings which she continues to this day.

Gemma Zahradka represents the second generation of the Omega Artworks family. She grew up attending art shows and renaissance festivals with Gary and Suzy. With that background, it's no surprise that she chose to pursue studies in Archeology and Studio Arts. She has her Bachelor of Science from the University of Wisconsin - La Crosse, where she also performed field research in Tanzania and Romania.

Gemma brings a younger pagan perspective to Omega Artworks. Her work focuses on the art and magic of the natural world. She is pleased to be carrying on the legacy of her parents work into the new millennium.

Gary started making custom swords in 1981, when a friend was making one for a metals class at a local vocational school. The friend needed some help and soon a collaboration began. Together they learned about wax and casting of bronze, finishing metal, etc. What started as a class project began to grow and in 1982, when the friend joined the military, Gary started designing swords as Omega Artworks. Gary worked by himself, taking personal pride in each item he made.

In 1985 he met Suzy and the business expanded. Gary created a wide variety of custom knives and athamés, custom canes, and magical items in many traditions. Over the years Gary and Suzy created many new artworks (as well as children!) They had shops at the Minnesota Renaissance Festival and the Bristol Renaissance Fair, as well as touring to Fairs in Texas, Iowa, and Florida. They also made sales around the country at various Science Fiction Conventions.

In 2001, Gary was diagnosed with a spinal condition that made it almost impossible to keep making items the way they were. Omega Artworks was slowly shut down and the new business Zahradka Art & Illustration was started. Since 2001, Gary and Suzy have been creating drawings and portrait paintings and winning awards around the country. With time and therapy Gary's spine has improved and old customers and new have sought out Omega Artworks for the unusual and exceptional items they offered there.

So in 2009 they decided to reopen Omega Artworks. And here you are.